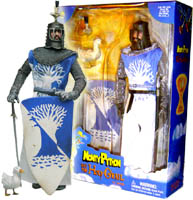 SKU:
£50.00
£50.00
Unavailable
per item
Debuted in November 2001 from SideShow Toy as the first in a series of action figures from a Monty Python license. Featuring over 20-points of articulation, Sir Bedevere stands 12-inches tall and comes with sword, shield, and a duck (which does not float on water). Portrait of Terry Jones as Sir Bedevere was sculpted by Oluf W. Hartvigson. Released as part of a limited series of 10,000.