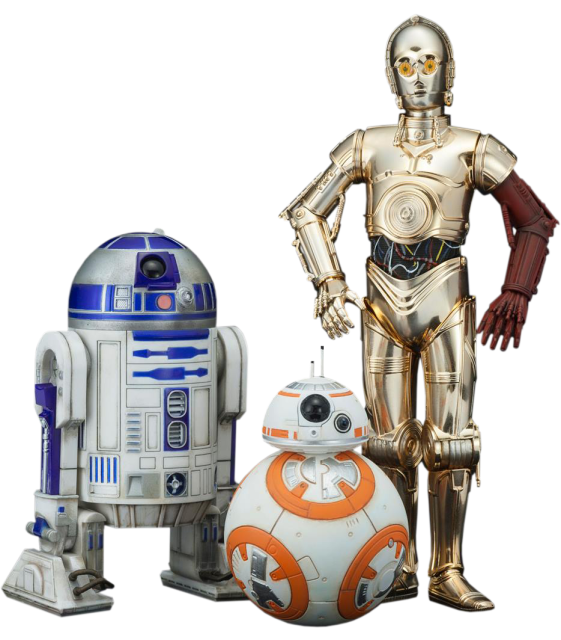 SKU:
£129.95
£115.00
£115.00
On Sale
Unavailable
per item
1:10 C-3PO & R2-D2 With BB-8 ArtFx+ Statues
Star Wars ARTFX+ Statues bring you all of the quality and detailing that you expect from an ARTFX release in a great smaller scale perfect for collecting.
The Saga Collection has been highlighting the cool characters from the classic films, and now the line is expanding yet again to include all of the heroes and villains from the new films starting with Star Wars Episode VII: The Force Awakens. Following the imposing Captain Phasma is a trio of droids with big personalities, two already well known and one premiering in the new film: C-3PO & R2-D2 With BB-8. From the opening scene of Star Wars Episode IV: A New Hope in 1977, the heroic droids C-3PO and R2-D2 have been beloved by fans. Their combination of hesitant worry and plucky courage made the pairing both dynamic and realistic, bringing to life strange-looking robotic characters in a futuristic space opera. Both droids are fully updated to match their appearance in The Force Awakens, and they’re joined by the unique new BB-8, a robot with a spherical, rolling body topped by an astromech-like domed head! All three are brought to life with Kotobukiya’s high level of detail and look like they stepped (or rolled!) right off of the big screen. ARTFX+ Statues are fun-to-assemble pre-painted snap-fit kits that can be put together easily in seconds without glue or modeling skill.
C-3PO, R-2-D2, and BB-8 are perfectly scaled (1/10) to the figures in the ARTFX+ line and they all come with magnets in their feet or lower extremities for extra stability on the included metal display base. Display this trio of heroic droids alongside other Star Wars Episode VII: The Force Awakens figure kits from Kotobukiya!
Brand: Kotobukiya
Product Code: KSW114