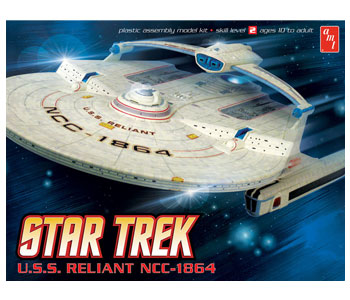 The fan favorite film, Star Trek II: The Wrath of Khan, re-introduced the tyrannical villain, Khan Noonen Singh back to the Star Trek mythos. But the Federation ship U.S.S. Reliant which he hijacked left an even more indelible impression on sci-fi modeling fans. The Reliant’s catamaran-like design endowed the ship with a distinctively sleek but aggressive stance. Equipped with five phaser banks and forward and aft dual photon torpedo launchers, the Miranda-class starship would prove itself a formidable opponent to the flagship of the Federation, the U.S.S. Enterprise.

This plastic assembly kit of the U.S.S. Reliant measures 18” long and 11” wide. It is molded in off-white and clear and includes a dome-style base featuring a metal support rod. Ship registry and marking decals are included.