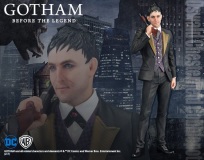 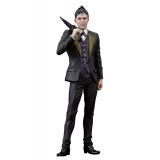 Oswald Chesterfield Cobblepot is the former umbrella-man of Fish Mooney, one-time underling of Salvatore Maroni and spy for Carmine Falcone, until Fish exposed him to Maroni. Following that, he ran a nightclub as part of the Falcone Crime Family and acted as Falcone's right-hand man. However, he soon betrayed Falcone, almost killing him. After the Falcone-Maroni gang war, he took over Falcone's organization and became an influential and powerful gangster. Later, Penguin lost his position of power. Oswald was then made an inmate of Arkham Asylum and was tortured by Hugo Strange. Making a return as the kingpin of Gotham's criminal underworld gaining the support of many of Gotham's citizens in the war against Hugo Strange's monsters and running a campaign to become Mayor of Gotham.