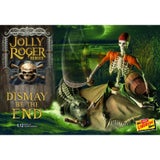 Released from Round 2’s tooling archive comes the second in a series of ghastly pirate figure kits. The Lindberg Jolly Roger Series: Dismay Be The End delivers a poor scallywag whose greed is furthering his undying torment. He thrusts his cutlass at the vicious alligator that hopes to pick his bones clean. The model is ready to come to life with the use of rubber band action. The skeleton figure measure approximately 6” tall. The setting delivers exquisite detail ripe for a modeler’s brush. This kit will capture the attention of swashbucklers young and old alike.

2nd in a series

The model comes to life with rubber band action!