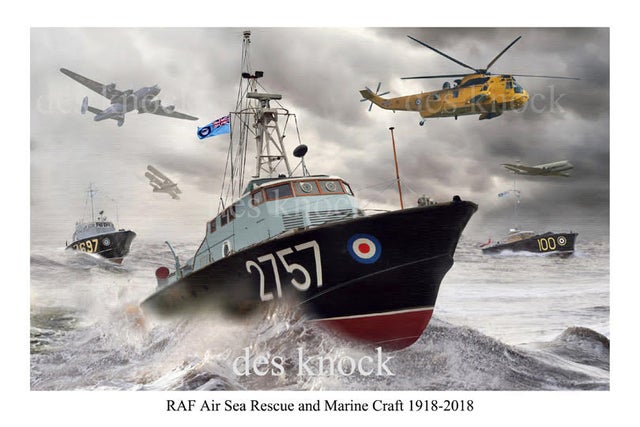 The Royal Air Force celebrated its Centenary in 2018 and to  highlight the role played by the RAF in Air Sea Rescue and Search and Rescue this was designed for a display that was seen at Pompey (Portsmouth Naval Dockyard) in 2018.

This was designed by D. R. Knock BSc. and it included aircraft types such as the Shagbat, Shackleton, Nimrod and Seaking plus the nautical arm of Air Sea Rescue in the form of a Class 100 High Speed Launch, Hants and Dorset High Speed Launch and a post war RTTL as seen at RAF Hendon Museum.  A fitting tribute to the Webfeet who served in Air Sea Rescue and as part of the Marine Craft Section.

Each print is personally signed by the artist making this a unique  display, and one that has been donated to several Aviation Museums around the UK. The print is 12 x 8 inches and can be framed.