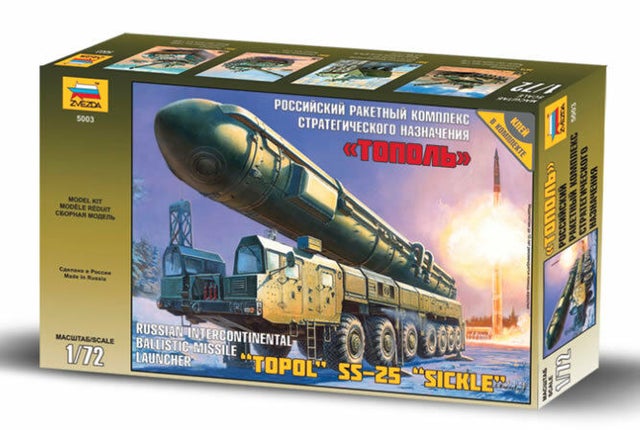 The Topol-M is a cold-launched, three-stage, solid-propellant, silo-based or road-mobile intercontinental ballistic missile. The missile's length is 22.7 m and the first stage has a body diameter of 1.9 m. The mass at launch is 47,200 kg, including the 1200 kilogram payload. Topol-M carries a single warhead with a 800 kt yield but the design is compatible with MIRV warheads. According to chief designer Yury Solomonov, the missile can carry four to six warheads along with decoys. Its minimum range is estimated to be 2,000 km and the maximum range 10,500 km. It has three solid rocket stages with inertial, autonomous flight control utilizing an onboard GLONASS receiver. It is reputed to have the highest accuracy of any Russian ICBM with a CEP of 200m. The body of the rocket is made by winding carbon fiber.

The Topol-M may be deployed either inside a reinforced missile silo, which is reported to be able to withstand a direct nuclear hit or from an APU 15U168 launcher mounted on the MZKT-79221 "Universal" 16-wheeled transporter-erector-launcher. This mobile launcher is capable of moving through roadless terrain, and launching a missile from any point along its route. The designation for the silo-based Topol-M missile is believed to be RS-12M2, while the mobile version is RS-12M1.