This 1/144 scale Flying Saucer plastic assembly kit presents a UFO from classic science fiction and makes a great display for any desk or shelf. The kit’s vintage-feeling packaging makes for a great display piece next to your finished model. The Flying Saucer from Another Planet kit features details like a clear lower dome, retractable landing ramps that lock in either the open or closed position, and a large full-colour decal sheet. The ship can be displayed in-flight or on lowered landing column.

105 parts with removable top to display interior detail and includes in scale Robby.

Virtually Mint!! All parts still sealed as per image.

Comet Miniatures' rare 1/8th scale limited run model kit of Robby The Robot from the classic 1956 sci-fi movie "Forbidden Planet". Produced 1987. The box has some creases and wear but has protected its contents well as the parts are all in very good condition, Comes with two clear head domes only one of the domes is needed. Please check out all the photos

The parts are a mixture of vacuum formed and injection moulded plastic, etched brass and white metal, so it is aimed at the more advanced modeller.Comes with interchangeable hands and will stand 12" tall.

Some parts off sprues but kit complete. 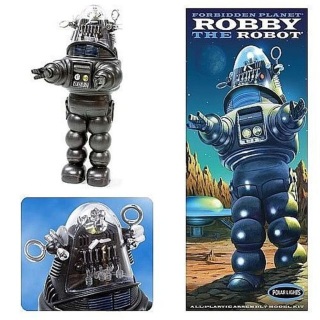 £
99.00
From the classic sci-fi movie, Forbidden Planet, comes one of cinema's most famous mechanical men: Robby the Robot. Robby is the faithful mechanical servant on board the exploratory starship, the C-57D, sent on a mission to the distant planet Altair 4. Stands Approximately 8" tall when fully assembled.
Product Code: POL810.
Issued 2009.
​Scale 1/12th - Mint in Box (Shrink Wrapped)