“Shinkai 6500” can be selected before and after renovation (remodeling work was completed in March 2012).

Little Giant: This authentically detailed model kit features one of Kaiju’s greatest creatures, Rodan! It features every detail from his leathery wings to his sharp talons. All the details: Rodan is perched atop a devastated building diorama with details like rubble, lamp post, and a turned over car. Simple assembly: This 11” tall Rodan model kit snaps together and can be painted for authenticity. It features a clapper board nameplate with a name decal.

1:25th scale. Plastic. 1933 Willys panel van converted for the fastest ride known to the Police Cells! Paddy Wagon is a 'Super-Snap' series kit which is moulded in blue/black/tan/ clear & chrome plastic with decals for the younger modeller but would make an interesting diversion for the older hot rod modeller.

Get ready for some real fun! The Kats at AMT have reached deep into the vintage tooling vault to resurrect Der Beetle Bus! It’s been over four decades since the kooky kits in AMT’s whimsical Volkswagen Van series have been available. Beetle Bus will be the first to “reach the beach” with full Retro Deluxe treatment!

Excellent extras like pad printed sl, tinted windows and a bonus cardboard display are all included. What’s more, the exciting expanded decal sheet has bonus graphics from Nestle candy favorites like Lik.M.Aid Fun Dip and Sweet Tarts! This is gonna’ be one SWEET kit!

MINI FLYING SUB FROM VOYAGE TO THE BOTTOM OF THE SEA

Mini Flying Sub from 'Voyage to the Bottom of the Sea'

Moebius are pleased to announce the release of the Flying Sub. The Flying Sub set comes complete with the Diving Bell, Mini-Sub plus a card stock interior from TSDS. This full colour die cut-out gives the impression of a full interior for the Flying Sub.

Moebius Models styrene kit of the Orion III is an authentic recreation of the ficional space vehicle, and an enhanced reproduction of the classic kit which was first released back in 1968!

The kit is nearly 15" long assembled and includes highly detailed panel lines and a display stand.

Very easy to build model kit of the fighter deployed by the Imperial troops in high numbers. Thanks to its twin engine, the TIE Fighter reaches a high terminal velocity and has impressive manoeuvrability.

A detailed model kit based on impressions of the 'flying saucer' craft which formed one of many fanciful projects created by German rocket scientists before and during World War 2. While some projects were successful others were less practical, or perhaps beyond the limits of technology. The flying saucer project has long been a favourite with sci-fi and fantasy history fans.

"Work began on this spherical aircraft in 1934 with airworthy prototypes of the Haunebu II capable of speeds of up to 6000 km/h said to have first flown in mid - 1943, but testing was cut short as the tide of war turned against Germany and they mysteriously disappeared as the war came to an end, supposedly captured for detailed investigation by advancing US and Russian forces."

FROM THE CLASSIC TV SHOW UFO

THIS EPISODE: THE INFERNAL MACHINE

LIMITED TO ONLY 1000 SETS WORLDWIDE

YEAR 1 – EPISODE 13: The moon is on a collision course with a number of large asteroids that will destroy Moonbase Alpha. The only hope of averting this disaster is a daring mission using Eagle Transporters equipped with winch mechanisms to deposit nuclear mines on the surface of the asteroids in order to blast them apart into harmless size rocks. Can the mines be deployed in time and can pilot Alan Carter escape the blast radius before the mines are detonated!

LIMITED TO ONLY 1000 WORLDWIDE

By popular demand! This smooth saucer accessory offers the opportunity to model the STAR TREK U.S.S. Enterprise in 1:350 scale as it should be - with no engraved grid lines. The lines featured on the original 11-foot filming miniature used in the production of the show were applied in pencil. A paper template is included to assist the modeler in applying his own grid lines as well as placing marking decals. “Rust ring” decals are included to assist the modeler.

This product replaces the saucer included in POL880.

Everything needed to create either the 1st or 2nd pilot versions of the U.S.S. Enterprise in 1:350 scale as featured in the classic Star Trek episodes “The Cage,” “The Menegerie Pt 1 & Pt 2” and “Where No Man Has Gone Before”.

When asked, most non-modelers say the need for messy glue and paint is the reason they don’t attempt building a kit. This hurdle has been overcome with this snap-together kit of the U.S.S. Enterprise from Polar Lights. This version of the ship comes from STAR TREK®: The Original Series and includes all colors and insignias pre-decorated on the parts. The kit assembles easily and is the perfect size for any bookshelf. An easy-to-follow pictorial instruction sheet is included along with a dome stand that features a support wire that allows the model to be displayed at different angles.

ALL PARTS pre-decorated, NO paint required

The most iconic spaceship in sci-fi

This release of the classic AMT U.S.S. Enterprise kit form AMT is the one everyone remembers building as a youngster. This kit starts the year-long celebration of the STAR TREK 50th anniversary and features special packaging to commemorate the event. The tooling was updated in 2007 and features a smooth saucer top. New to this release is a dome base with metal support that replaces the old stand. Accurate marking decals and sticker sheet are included to decorate the model and pictorial instructions are included to assist with building.

In the climax of BATMAN RETURNS, BATMAN used the BATBOAT to travel through the GOTHAM CITY underground drainage system to infiltrate the lair of THE PENGUIN. Among its gadgets, the craft features radar,. This crime-fighting tool allowed BATMAN to study the positions of the Rocket-Armed penguins that had been preparing to attack plaza at the center of GOTHAM CITY. With the plot foiled, BATMAN turned his attention to spoiling The Penguin’s escape and restoring peace once again for the citizens of GOTHAM CITY.

This simple-to-assemble AMT model kit captures the BATBOAT in great detail. Parts can be snapped together and joints stabilized with glue if desired. It is injected in black plastic with dark tint clear window parts and a full colour GOTHAM CITY underground river backdrop display.

The vehicle's cockpit has a built in camera that transmits the driver's POV to a smart phone for a thrilling, front seat ride. Place the highly detailed, new movie Batman action figure behind the wheel and speed to the crime scene. See smoke release from the tailpipe and the engine roar. The figure's arm turns the wheel as the powerful Batmobile™ races at top velocity! When DC Super-Villains are in range, engage the special "jump mode" and elevate the Batmobile™ for prime targeting.
Deluxe, remote controlled Batmobile with premium Justice League movie features.
Interactive control with a smart phone app and driver's POV camera in cockpit.
6" scale Batman figure has body movements with arm that turns the wheel.
Stunning collectors packaging
Engine makes authentic sounds and smoke releases from the exhaust pipe.
Four armoured wheels roll and missiles move on hood of the car and fire.
Special "jump mode" elevates the vehicle for better aim.
BIG SIZE - 28" Long"
Brand: Mattel
Product Code: MFTD33 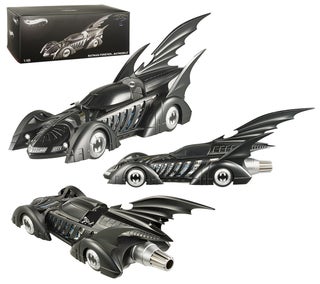 Explorer 1 became the first US satellite when it was successfully launched into orbit on February 1, 1958, by a US Army Jupiter-C rocket, modified for the flight to become the Juno-1.

A 1:6 scale model of Explorer 1 was produced by the Ideal Toy Company (ITC) in 1959, only a year after launch, and this was quite a detailed kit. It not only had an opening outer casing to show off the interior, but sat on a stand that had a handle (top picture). Turn the handle and, via what was in effect an all-plastic musical box, it ‘clicked’ out the telemetry signal the satellite sent back!

The kit became quite rare, but those who wanted to actually build the model (instead of using it as loft insulation) were saved when Glencoe Models came on the scene.

Back To The Future III Time Machine

1:25 Back to the Future III Time Machine

Molded in brushed silver and gray

Car from Back to the Future III

The Dragonfly is Dr. Quest's personal and probably supersonic jet. It contains a cargo bay capable of holding motor vehicles, a recreational area and media center, and a cockpit with four seats. In addition to regular landing gear, it contained skis for snowy terrain. Debuting in the classic series, it did not appear in season one, but was later resurrected by Lance Falk for the second season. Falk personally confirmed with Quest creator Doug Wildey the 'Dragonfly' name. Falk destroyed it in General Winter, where General Vostok's freeze bomb caused a rough landing and a fall over a cliff. 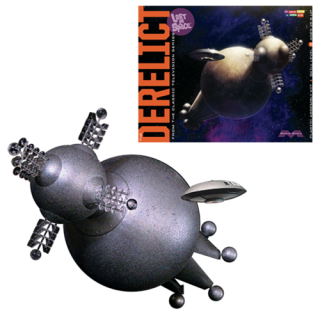 Now you can build the villain ship Derelict, from the pilot episode of Lost in Space! Posable "fingers" allow you to build either as the closed version, or open to accept the Jupiter 2 (also included). This Lost in Space Derelict and Jupiter 2 1:350 Scale Model Kit requires paint and glue for final assembly.