Discover the brand-new Space: 1999 series of collectibles based on the hit TV show! Introducing the first edition in the series - the Eagle One Transporter.

A cult classic of 70s sci-fi, the TV series Space: 1999 followed the spacefaring adventures of Moonbase Alpha, whose 311 personnel were left stranded when a massive nuclear explosion sent the Moon itself hurtling into deep space.

Designed by Academy Award-winning SFX director Brian Johnson (Alien, Star Wars, 2001: A Space Odyssey), the Eagle One is the iconic hero ship of Space 1999, and the primary transport for the crew of Moonbase Alpha. This modular vessel had many alternative configurations: it’s presented here with its transport module which was used for deploying crew to and from alien worlds.

Powered by 4 fusion rockets, the Eagle One could reach speeds of 23,700 miles per second, and fly for up to 48 hours. This Transporter Eagle (or "Type A") could hold 8-12 passengers, plus the pilot and co-pilot, sacrificing space for scientific equipment or weaponry in favour of a passenger pod.

Measuring an impressive 25cm in length, the Eagle One Transporter Ship is accompanied by a companion magazine packed with design info, interviews, and more.

EACH EDITION INDIVIDUALLY AND SEQUENTIALLY NUMBERED.

THIS VERY SPECIAL LIMITED EDITION FEATURES THE MK IX HAWK AS IT WAS ORIGINALLY PAINTED AND DELIVERED TO THE STUDIO FOR FILMING. THE ORIGINAL BRIEF FROM DESIGNER BRIAN JOHNSON, WAS AS THE HAWK WAS FROM THE SAME “FLEET” AS THE EAGLE TRANSPORTERS THIS SHOULD BE REFLECTED NOT ONLY IN ITS DESIGN, BUT IN COLOUR SCHEME AS WELL. HOWEVER, SHORTLY BEFORE FILMING OF THE MINIATURE BEGAN, IT WAS DECIDED THAT THE MODEL TOO CLOSELY RESEMBLED THE EAGLE TRANSPORTERS AND WAS QUICKLY RE-PAINTED AT THE STUDIO IN THE NOW DISTINCTIVE ORANGE LIVERY SEEN IN THE FINAL EPISODE.

IN CELEBRATION OF THE ORIGINAL DESIGN AND COLOURWAY OF THIS ICONIC SPACE: 1999 WARSHIP WE PRESENT:

1612 Electronic Stun Gun and Comlock with Lights and Sound.

Faithful 1:1 Scale Replicas of Studio Props as used in Space 1999.

THIS EPISODE: THE INFERNAL MACHINE

Buried deep under the surface of the moon, beneath Moonbase Alpha, is the huge hangar where all EAGLE TRANSPORTER SPACECRAFT are housed, maintained and repaired. Here sub assembly and pod selection is carried out for a specific mission prior to launch. Maintained by an team of engineers and diagnostic experts, they ensure that the EAGLE FLEET is ready to launch at a moment’s notice.

This EAGLE HANGAR DIORAMA brings to life all the excitement from the show in stunning detail.

Signed by Brian Johnson himself, they come beautifully presented ,with a signed pod and photograph of Brian signing them.

We have very few of these incredibly rare editions of ONLY 300 WORLDWIDE!

LIMITED TO ONLY 1000 SETS WORLDWIDE

YEAR 1 – EPISODE 13: The moon is on a collision course with a number of large asteroids that will destroy Moonbase Alpha. The only hope of averting this disaster is a daring mission using Eagle Transporters equipped with winch mechanisms to deposit nuclear mines on the surface of the asteroids in order to blast them apart into harmless size rocks. Can the mines be deployed in time and can pilot Alan Carter escape the blast radius before the mines are detonated!

This superb iconic display model is the "hero" ship of the Gerry Anderson TV show, Space 1999.

Researched for authenticity to reflect the 44" filming miniature used during the television show production.

Endorsed by the ship's designer and Oscar and Bafta award winner, Brian Johnson.

This superb Eagle Transporter model is limited to only 500 pcs Worldwide. It is already sold out from the manufacturer and becoming increasingly scarcer.

If you are looking for a superb Eagle Transporter replica model, this is a very fine example and will look fantastic in your Space 1999/Sci-Fi collection!

2019 release of the 22″ Prebuilt Space:1999 Eagle Display Model was an instant sell out. It was limited to just 500 pieces as MPC tried to judge the market for a fully painted and assembled model.

This time MPC have released the model with a Rescue Pod which features its iconic red and white stripes. The weathering panels have also been changed up from last time as well. And MPC have bumped up the production number to 850 this time around. Here is a look at this version’s packaging.

This stunning new model will be Pre-Assembled and Pre-Decorated with only a few parts needing to be snapped into place for completion! Due to the intense amount of labour required to manufacture this new special model, production is limited to only 750 pieces.

The mode feature a slightly different engine bottle arrangement and all-new shoulder pods. The springs will be a bit “softer” to compress more fully and New Season 2 Pilots.

ORIGINAL DIALOUGE FROM THE TV SHOW

In Scale with the Electronic Eagle Launch Pad.

In Scale with the Electronic Eagle Launch Pad. 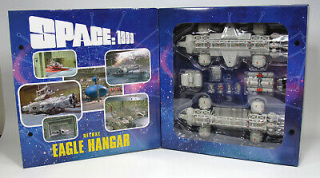 Buried deep under the surface of the moon, beneath Moonbase Alpha, is the huge hangar where all EAGLE TRANSPORTER SPACECRAFT are housed, maintained and repaired. Here sub assembly and pod selection is carried out for a specific mission prior to launch. Maintained by an team of engineers and diagnostic experts, they ensure that the EAGLE FLEET is ready to launch at a moment’s notice.

This EAGLE HANGAR DIORAMA brings to life all the excitement from the show in stunning detail.

Comes with display case and a hand signed certificate from Gerry Anderson: Low Number 0065 of 1300

The model is still sealed in its original box and never displayed - CRISPY MINT!! 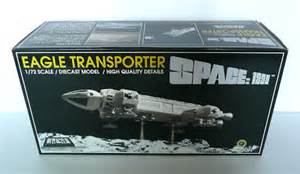