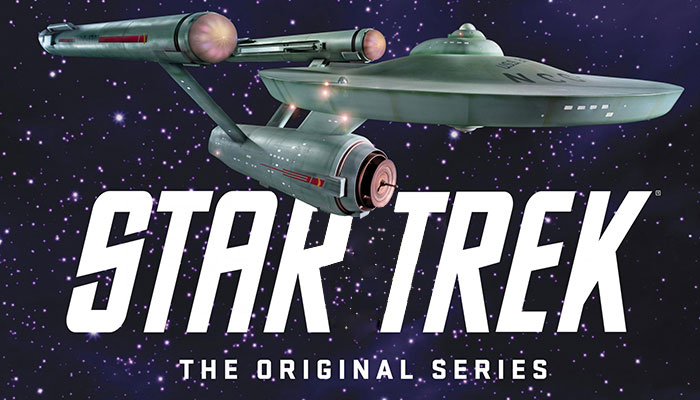 A 1/32 scale plastic model kit that reproduces the inside of the bridge of the USS Enterprise, the capital ship of Star Trek, a world-famous science fiction drama.

Speaking of the bridge of the Enterprise issue, fans will be familiar with it as a stage where many episodes and famous scenes were born in the drama.

The model includes interior partition parts in addition to the bridge equipment.

The state of the bridge seen on the screen of TV etc. is realistically expressed.

In addition, 6 figures that can be finished as characters such as Captain Kirk and Mr. Spock are also set.

Produced by AMT ERTL; Stock Number 6006 Vintage 1991Condition : Box has been opened however the model has not been assembled out of its dry dock.

And here is a look at the artwork for the reissue of the 1:350 Classic Enterprise from Polar Lights. This reissue will include the pilot parts so you can build as either the Production version, or the Enterprise as seen in the Cage or Where No Man Has Gone Before.

Round 2 is reissuing the 1:350 Classic Enterprise and will be including the Pilot Parts. This reissue also has the smooth hull, removing the engraved gridlines. It includes painting information based on the restoration of the studio model.

This is the long awaited 1:350 Classic Enterprise from the original Star Trek television series. Round 2 consulted with Gary Kerr, a renowned expert on special effects miniatures from Star Trek and many other series for this new model. The kit is an extremely accurate depiction of the Enterprise as seen in the original series. It includes a shuttle bay interior, bridge detail and is fully designed for lighting.

New but only ONE LEFT!!

Take the 1:350 scale U.S.S Enterprise NCC-1701 to the next level of realism and life that plain plastic can’t deliver.

This accessories set to Pre-order only - (3 Weeks Delivery)

Produced in 1989 by David Winfrey

- Electronic components with convenient plug connections that are individually tailored to the kit and can be directly installed. 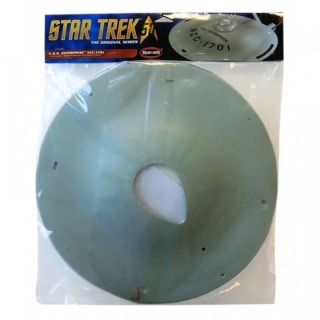 By popular demand! This smooth saucer accessory offers the opportunity to model the STAR TREK U.S.S. Enterprise in 1:350 scale as it should be - with no engraved grid lines. The lines featured on the original 11-foot filming miniature used in the production of the show were applied in pencil. A paper template is included to assist the modeler in applying his own grid lines as well as placing marking decals. “Rust ring” decals are included to assist the modeler.

This product replaces the saucer included in POL880. 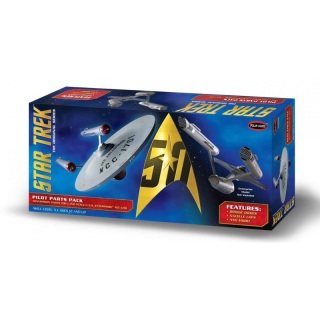 Everything needed to create either the 1st or 2nd pilot versions of the U.S.S. Enterprise in 1:350 scale as featured in the classic Star Trek episodes “The Cage,” “The Menegerie Pt 1 & Pt 2” and “Where No Man Has Gone Before”.

The U.S.S. Enterprise from STAR TREK: The Original Series is one of the most indelible spacecraft in all of sci-fi. This re-issue of the AMT Enterprise Cutaway kit showcases the inner workings of the classic ship. It can be built to expose inner workings such as the bridge, shuttle hangar and warp nacelles or it can be built as a complete ship. A decal sheet is included to add all exterior markings and windows as well as some interior details as well.

The kit has been upgraded to incorporate Round 2’s standard dome display base with metal support tube.

This release of the classic AMT U.S.S. Enterprise kit form AMT is the one everyone remembers building as a youngster. This kit starts the year-long celebration of the STAR TREK 50th anniversary and features special packaging to commemorate the event. The tooling was updated in 2007 and features a smooth saucer top. New to this release is a dome base with metal support that replaces the old stand. Accurate marking decals and sticker sheet are included to decorate the model and pictorial instructions are included to assist with building. 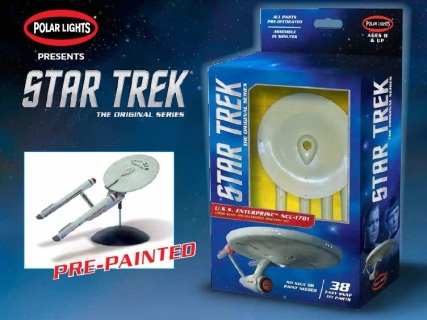 When asked, most non-modelers say the need for messy glue and paint is the reason they don’t attempt building a kit. This hurdle has been overcome with this snap-together kit of the U.S.S. Enterprise from Polar Lights. This version of the ship comes from STAR TREK®: The Original Series and includes all colors and insignias pre-decorated on the parts. The kit assembles easily and is the perfect size for any bookshelf. An easy-to-follow pictorial instruction sheet is included along with a dome stand that features a support wire that allows the model to be displayed at different angles.

ALL PARTS pre-decorated, NO paint required

The most iconic spaceship in sci-fi

Model building is a rewarding hobby for young and old alike. In most cases fathers have introduced their children to the hobby by helping them build their fi rst kits. The Build-2-gether program from Round 2 models offers a unique opportunity to allow adult and child to build models of the same subjects while supplying the proper skill level requirement for each.

This Build-2-gether set allows the sharing of the model building experience combined with the appeal of the iconic starship from Star Trek: The Original Series. The set offers a moderate level gluetogether model of the U.S.S. Enterprise™ for the adult while allowing beginning modelers to build a snap together version of the iconic ship. The larger glue version includes water-slide decals with stickers supplied to decorate the smaller snap kit. 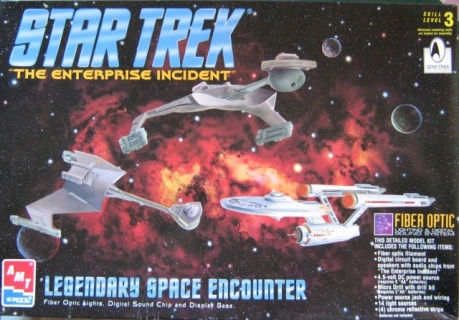 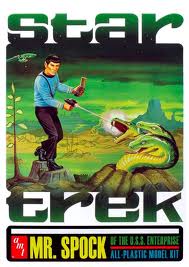 £
29.95
IP. Re-issue of the classic AMT kit depicting Mr.Spock and a three headed serpent. 35 piece kit presented in a Limited Edition embossed tin and including a print of the artwork.
Requires construction and painting.
Product Code: AMT624. 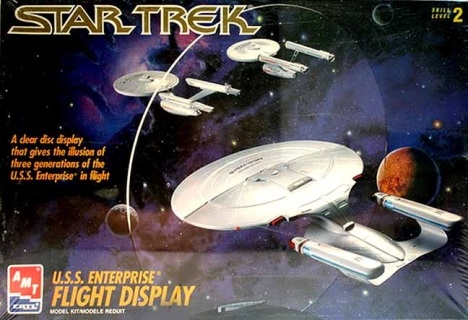 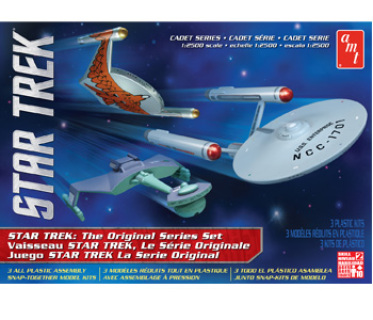 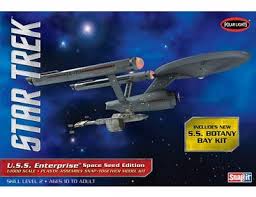 The fan-favourite villain, Khan Noonen Singh, made his first appearance in the Star Trek®: TOS episode The Space Seed. Khan originally entered the scene found aboard the SS Botany Bay. This model kit celebrates both the episode and the villain by including a brand new kit of Khan's original ship. This snap-together kit includes both the TOS version of the U.S.S. EnterpriseTM NCC-1701 and the Botany Bay. A sturdy dome base suports both ships and thorough decals and instructions and included.

Moulded in gray and rust

Based on classic Star Trek episode: The Space Seed

Includes dome base and decals 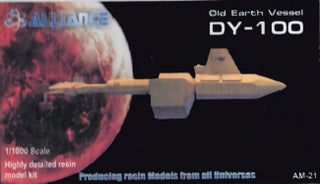 Taken from the original Star Trek series, this is the Old Earth Vessel DY-100, also known as the Botany Bay.

It's 4.5" long and includes complete assembly and painting instructions. This 6 piece resin model is 1:1000 scale, in scale with the Polar Lights classic Enterprise kit. 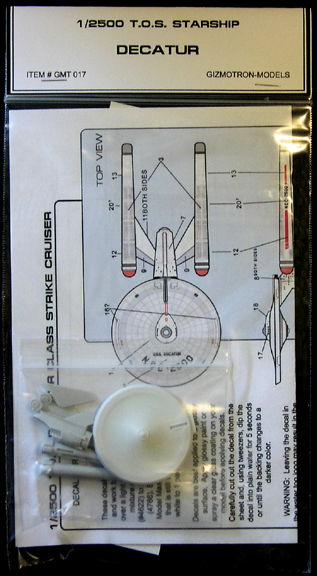 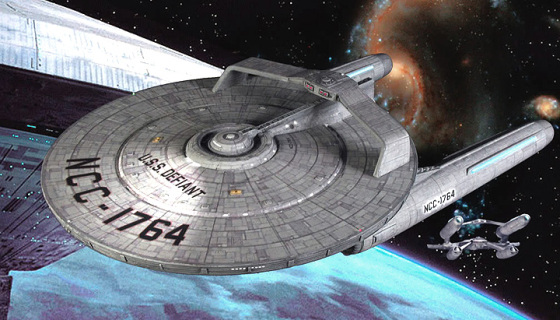 Parts: 5 resin, plus base

Another Gizmotron design, this 12 resin kit is based on the original Constellation design.

Assembly instructions and decals are included. The assembled kit is over 7" in length. 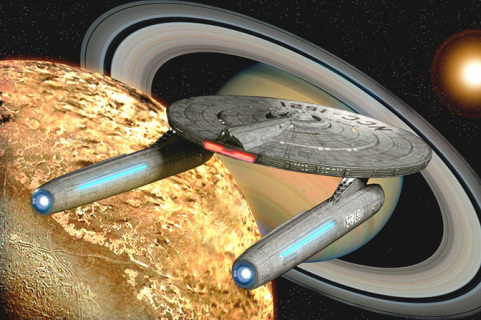 NOVA HOBBIES RESIN MODEL OF A 1/1400 SCALE WASP CLASS STARSHIP. THE WASP CLASS IS AN EARLY DESIGN, PREDATING THE CONSTITUTION CLASS BY MANY YEARS. THIS CLASS WAS A CONTEMPORARY OF THE DAEDALUS CLASS, WITH A SLIGHTLY INCREASED INTERIOR VOLUME AND TRI-NACELLE DESIGN. COMES WITH DECALS AND DETAILED PAINTING INSTRUCTIIONS. 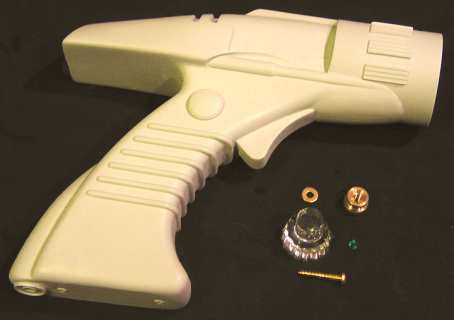 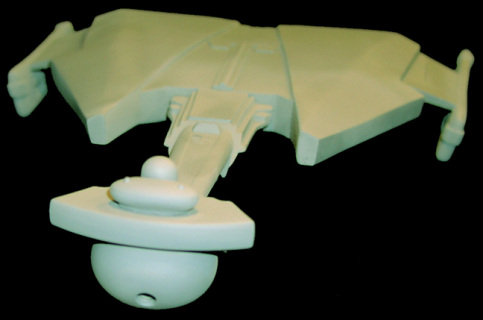 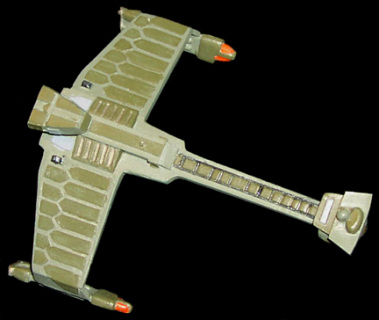 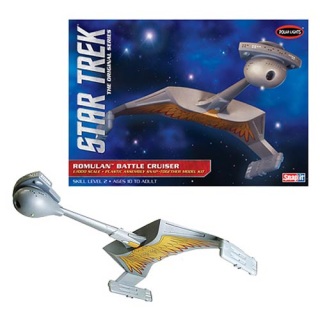 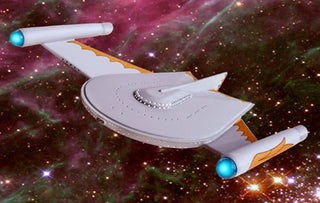 This is a 6 piece resin kit. Assembled it is 3.75" long and has a 4.75" wingspan. It also comes with decals and instructions. 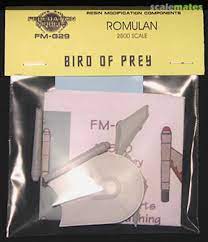 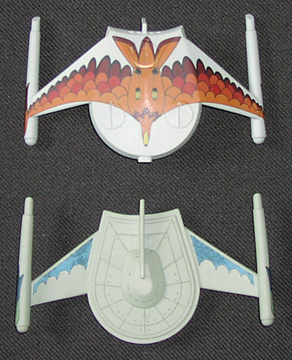 This is Gizmotron's 1:1400 scale Romulan Bird of Prey, which is available from Federation Models. This all-resin kit comes in 5 parts...2 wing/engine assemblies, the main hull, the top fin, and the "plasma weapon". The kit comes with a great set of decals, including two separate "birds" for the underside...one in the traditional red/orange scheme, and one that's a blue/green scheme. 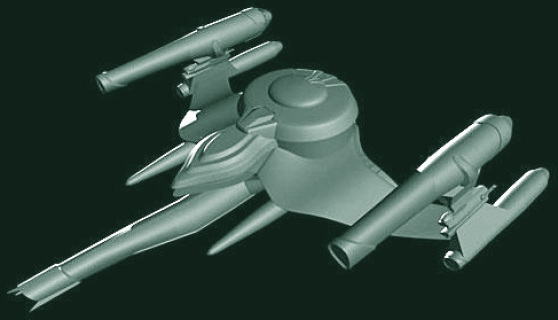 When the digital version of the original Star Trek series was created they added many new features, one of them was the Gorn Ship and it is now available in 1:1400 scale too.

This resin kit comes with 7 parts and assembly instructions. This ship is just over 7" long assembled.