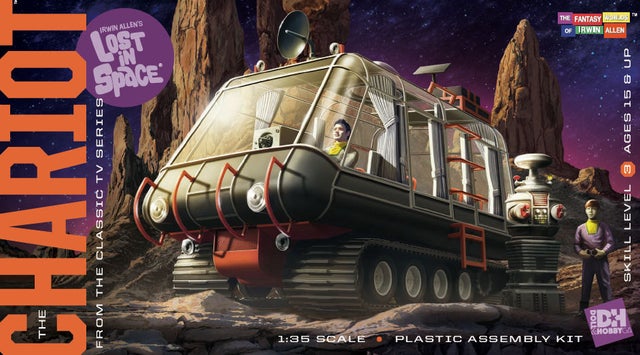 New kit of the Lost in Space Chariot.  This is an ALL NEW model kit in 1/35 scale.

"Lost In Space" was a science-fiction drama broadcast in the U.S. from 1965 to 1968, and it was also shown in Japan from 1966 to 1968. It was produced by Irwin Allen, who was also responsible for "Voyage to the Bottom of the Sea" and "Time Tunnel." The Chariot was a space exploration used by the Robinson family in the show to go out and explore the many unknown planets they landed on; its futuristic style with a transparent cabin and tracks on the undercarriage made it a fan favourite. Doll & Hobby now brings us the first 1/35-scale model kit of the Chariot as a completely new mould! It's accurately reproduced, down to the interior equipment, and alll New figures of Will Robinson, John Robinson and the Robot are included. A double-sized background board is also included to enhance your display.

Doll & Hobby's All New kit in 1/35th scale and will include all new figures of the B9 Robot,Will Robinson and a seated figure Of John Robinson Driving the Chariot.