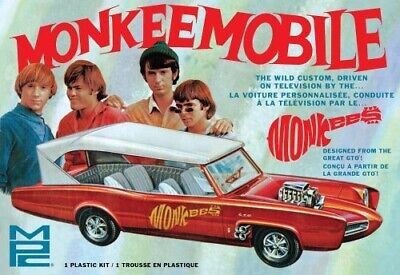 The Monkeemobile is a modified Pontiac GTO that was designed and built in 1966 by designer Dean Jeffries for a new TV show called “The Monkeesâ€. Jim Wangers from the Promotional Department at Pontiac supplied two base 389 4-barrel 1966 GTO convertibles with automatic-transmissions to be converted into Monkeemobiles. The car features a tilted forward split two-piece windshield, a touring car convertible top, modified rear quarter panels and front fenders, exaggerated tail lamps, set of four bucket seats and an extra third row bench where there was originally a trunk, a rear-mounted parachute and a GTO emblem on the front grille.