The Car is the Star

The original dragster was designed, created and owned by famous custom car and rod builder, CARL CASPER and was used as a show car as well as a competition dragster.

This black Impala is an automotive star on the 'Supernatural' TV series. The Impala is Dean's trademark black 1967 Chevrolet Impala. It was passed down to him by his father. The trunk holds a mass of weapons that are modified and crafted to aid The Winchesters in their hunting activities. Dean refers to the Impala affectionately as "Baby."

1952 Hudson Hornet in special Mel’s Drive-In packaging. Seems like when researching Mel’s for our Drive-In kit, nearly every image had a Hudson parked out front! What better way to introduce a new year of Hudson than with a flash back to one of those images. 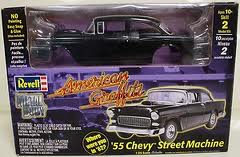